Carrying a Torch for Service: Volunteerism in the Olympic Games

This post was written by NobleHour Special Contributor Natasha Derezinski-Choo, a student at Grimsley High School in Greensboro, NC.

The Olympic Games mark an exciting time of fierce competition and teamwork.  Both deep-rooted rivalries and camaraderie accompany the competition and sportsmanship that make the Olympics so special.  It is a time of national pride and of international friendship. Scarcely there comes a time, except during the Olympics, when classes or work will slow and the streets will quiet, but inside the cheers will roar in front of television screens.  For example, many classes and businesses stopped in both countries to witness the heated rivalry in last week’s Canada vs. USA men’s hockey game.


One does not need to be an athlete to appreciate the Olympics.  Personally, I have not set foot on a track since running for a, thankfully singular, required physical education class. Watching sports on television typically results in my falling asleep, but I make one exception when the Olympics are on.  The Olympics have been a personal fascination of mine since childhood.  As a child I would imitate, albeit clumsily, the figure skaters on the television screen, seeing the Olympic stage as the realization of dreams.  However, Olympic dreams are made possible by more than just athleticism; volunteers facilitate the events, and in many ways volunteerism is a way anyone can make it to the Olympic stage.

The tradition of volunteerism at the Olympics and Paralympics began in the London 1948 Olympics.  In recent history, 70,000 volunteer “Game Makers” assisted in the London 2012 Summer Olympics, donating 8 million hours of their time to make the games possible.  More than 25,000 volunteers helped at the Vancouver 2010 Winter Olympics.  Volunteers come to the Olympics to experience one of the biggest international sporting events, and their hard work reflects what I think is the most important elements of the Olympics: the altruistic spirit that together we can make dreams come true.

This past month in Sochi, 25,000 volunteers helped facilitate the Olympic games from start to finish.  They performed an impressive number of tasks to help the Olympics run smoothly.  In addition to their behind the scenes jobs at each sports event, volunteers in Sochi provided an air of hospitality to guests from around the world. Volunteers were present at airports to welcome guests, helped guests find transportation to their hotels and carried their month’s worth of luggage. They helped direct visitors, greet spectators at events, and ensure events ran on schedule. Brightly clad in the colourful jackets, which were the volunteers’ uniform for the games, they carried out all these jobs with both beaming smiles and excitement.

Sochi Olympic volunteers represent a uniquely young group.  Russian history has not always left space for the culture of volunteerism, and the Olympics represents a new tide of young people willing to come from near and far to give their time to helping others.  The average age of volunteers was 23, with 80 percent of volunteers younger than 30.  Many are university students.  Note that the average age of volunteers in the London 2012 Summer Olympics was 44 and in the Vancouver 2010 Winter Olympics was 45. In addition to the exhilarating experience of taking part in the Olympics, these young volunteers have also gained some skills and knowledge from their training prior to the games. Before the Olympics, most people in Sochi did not speak English, but every volunteer underwent basic language training in order to communicate with visitors.

Volunteers for each Olympic event are selected by an application process.  Hundreds of thousands of applications roll in one to two years in advance.  The process pays special attention to language skills, problem solving, and other skills that might be helpful to facilitating the Olympics.  For example, medical skills may prove advantageous to help run drug screening for athletes.  However, being an Olympic volunteer does not require special skill sets, and volunteerism is a way in which anyone can be part of the Olympics, even if it means simply directing traffic and welcoming guests with a smile.  A large majority of volunteers, regardless of their assignments, reported that the experience of just being in the Olympics was unforgettable.

In Sochi and across Russia, many hope that a culture of volunteerism will continue to thrive after the Olympics.  The Olympic games are one of the best examples of how volunteerism can make an impact on the world.  Although the games have come to a finish for this year, I must say that the team I cheer for the most at each event is the vast team of volunteers.

In a local sense, you can also take part in the spirit of Olympic volunteerism.  Volunteers are always in need for Special Olympics events in each state. Find opportunities on NobleHour and then come back to log your volunteer hours. 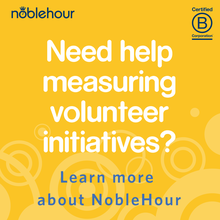